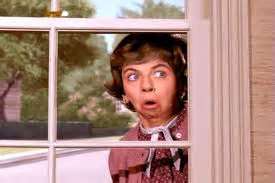 They’re out there.  You can’t escape them.  They’re masked with bright smiles and orange hats, but beneath it all they are evil!  They are a hidden nation spread across the world whose sole purpose is to annoy the living sh*t out of you.  They are your NEIGHBORS [cue horror movie music]!

Who hasn’t had an opportunity to run in with an exasperating neighbor?  The ones who borrow sugar, peanut butter, or money?  The ones who ask to use your telephone just for a sneak peak into your home? The ones who blast their music at 5am or have rambunctious children who all own gravity boots and dance on the walls?   These neighbors are the enemy and must be dealt with using popcorn firing machine guns!

To the ordinary eye they appear to be common coffee drinkers who look out for your car when you’re not pasted to the window ledge being nosey yourself.  However to those more trained in the art of “spotting bullsh*t”, they are cloaked menaces to society who are passive aggressively begging you to whoop their ass! 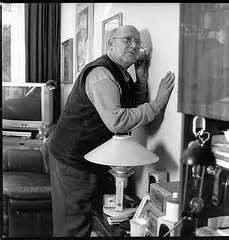 They meet during times when you are not at home to plot their evil schemes to piss you off.  Silenced with a malicious smirk, they watch you carefully to learn your ways and moods.  They only strike when the iron is hot and your tolerance level is low.  Their children tease your children and are secretly influencing them to become YNITs (Young Nuisances in Training).  Neighbors, in any part of the world, multiply like roaches.  ‘Raid’ doesn’t kill them; garlic is useless and your threats are less than idle.  You are helpless to their plots, privy to their insults and targets for their gossip.

What they don’t know is that there are support groups for those poor folks who are bogged down with the scent of undelightful food, car jump requests and vacuum cleaning at the stroke of midnight.  In these support groups, members are taught specifically how to deal with malevolent neighbors and their followers.  They are educated in hand to hand combat, 2×4 plank weaponry usage and sharp tongue rebuttals.  Dealing with your pesky neighbors isn’t hard if you know the right tactics and impressionable threats to use.  Words like “warning!”, “smoke inhalation”, and “I hope your brakes don’t give out on you” have all been proven successful in ridding one’s self of an irritating neighbor.  If those little words do nothing for your peace and sanity, then here are a few other ideas you may try:

Shave their dogs all over except for the spine.  A canine Mr. T is enough to drive anyone mad.

Super-glue their doors and windows shut and light a match to a paper bag full of hair weave.  The smell of smoke will drive them frantically insane.

Speak to them only in Pig Latin and use intrusive hand and body gestures.  The more outrageous, the better.

When an invasive neighbor speaks to you, reply only in song – heavy metal preferably.   This is most effective if you live in an urban neighborhood, however applying makeup excessively will only add to your favor.

Leave your trash in front of their doorstep with a nice note that reads: Happy Hanukah. This is most effective in the summer time and if the trash can is set aflame.

Keep in mind that none of these defenses are guaranteed to work, but they will definitely make that irritating home owner who lives next door to you think twice about singing “Good Morning Holly” nude in their front window just as you walk pass as you head out for work each morning.

There’s no need to get annoyed.  Get even!  All it takes is a little effort, and a wise Hottywood of seasons passed once said 90% of any effort is getting started!

Quote of the week:    “The Bible tells us to love our neighbors and also to love our enemies; probably because generally they are the same people.”

2 thoughts on “Man vs. Wild: The Rise and Fall of the Nuisance Neighbor”