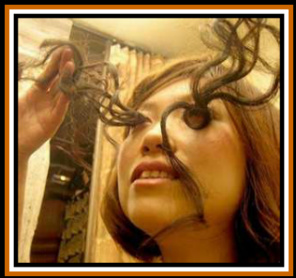 “Excuse me ma’am, there’s a spider crawling on your face. Oh wait, those are  your eyelashes.”

It isn’t uncommon for women to hear this kind of phrase from the majority of the population of men on the planet. Okay, maybe not the entire planet.  More so in cities saturated with pop culture phenomenon.

Overly long – or as I like to call them – FAKE eyelashes are a woman’s version of men’s skinny jeans. And just like skinny jeans and the men that wear them, over animated eyelashes should be set on fire, particularly while still attached to the woman who is wearing them, unless of course it’s Kim Kardashian. She may be a money hog and unable to keep a man for whatever reason but the girl is undeniably beautiful. Even with her faux lashes she can do wrong, except maybe marry a moron for 72 days and expect the general public to believe she didn’t expect a backlash. But hey, I didn’t say she was the brightest apple in the bunch…just the prettiest. Anyway we aren’t here to discuss Kimmy Kakes. Instead we are here to throw stones at women that wish they could gussy up like Mrs. Ms. Mizz Kardashian, sadly and unfortunately to no avail.

What is it about long eyelashes that push boundaries? It’s not the lashes itself but rather the women that wear them incorrectly (over excessively) and in the most inappropriate places (i.e., work, church, school, laundromat).

One shouldn’t be surprised to see the lash craze on models, actresses, female musical entertainers or drag queens. If I had to give an opinion I’d say they were perfect for stage play at long distance range. But if one just so happens to not attend a theatre, concert or skim through the pages of a glamour magazine, but instead make a midnight run to a local McDonalds or 24 hour CVS, the shock of eye ropes hanging from the counter clerks’ face could stop the heart like a baby locomotive hitting a deer on a railroad track. 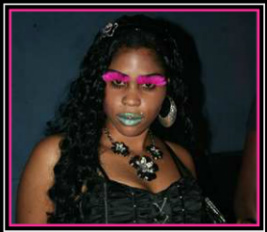 Today’s modern woman turns the spotlight on her – aiming that spotlight on the spectacle of her eyes. Ladies, especially in the urban community, dive head first overboard when attempting to vamp up the glam. They are seemingly more rich in eye makeup than they are in bank account dividends. Aside from the mascara caked up on the ridiculously long eye strands, women have the audacity to pair the lashes with wigs and weaves. As if having a pair of tarantulas hovering over the eyeballs isn’t enough, the nerve it must take to go the extra mile to throw a shiny tail of zebra on top of the crown.

I have but one word for you fashion faux pas victims – “STOP!” Leave the lashes to the Kardashians, “please,” and “thank you.”

Despite what you may think, unless you are posing for Tyra Banks’ America’s Next Top Model or somebody’s Esquire Magazine, just be happy with the natural eye visors God gave you. Men don’t like the extra amenities anyway. In fact we won’t even notice or often times care what you look like until the lights go out. So while you think you’re getting dolled up Barbie style, we’re looking at you more in the likeness of Garbage Pail Kids.  The only exception to this rule is if you have attempted to turn your stove top flame up to a maximum level like the chefs at every corner Chinese carry out and incidentally burned off your eyebrows and lashes. Otherwise you will only continue to look as if your face is being possessed by an alien race of arachnids. And believe me when I tell you it doesn’t take super Spiderman senses to sense something wrong with that look.