Why is it no one likes to warn a guy when his fly is open? I think I’ve been walking around all day showing my goods. 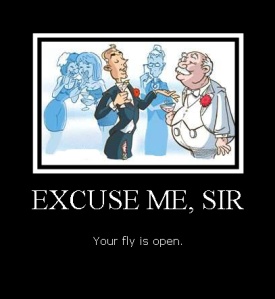 The reason why no one makes an effort to let a man know when his fly is open is because everyone on the planet is secretly an undercover pervert. That’d be my easy one-liner answer.

In an attempt to boost your ego, I could say that you should be flattered when no one tells you your zipper is down, supporting that comment with a thought that everyone wants to see or is impressed by what you’re working with. But if you allow time to fast forward by just a hare, the dust will settle and the truth will kick in.

Women won’t warn you because they are embarrassed (some women anyway) to let you know they are [blatantly] looking at your crotch. They don’t want to give you the wrong idea or impression about themselves and their [sexual] values.

Men won’t warn you because their masculinity and reputation would be at stake. If a man tells you your fly is open, he will fear you’ll believe he’s been staring at your family jewels and the next thing you know he’ll be convinced you think he’s gay.

The best way to avoid this kind of situation is to use duct tape or staples to keep your pants fastened. You could also trade in your trousers for a medieval jumpsuit of armor. Be warned however that once you are clad in a metal suit, it won’t be quite as easy to whip out your piece and do your business when you have to go number one behind a bush.