The last time I ranted about a fellow coworker, the rant was in regard to Mrs. Cafeteria Lady for being lazy and trifling. Sadly, today’s rant is still directed to her, this time for proving herself to be a big fat liar.

Remember that time when you said you were going to add pancakes to the breakfast menu? I believe it was mid 2010 when you told me that bold face lie. I am convinced you had no intention of adding anything to the menu because you [probably] felt that since I’m not the only hungry ninja in the dojo, the warrant for pancakes would cause you to sweat over a hot stove even earlier than normal, making more work for you and probably resulting in your armpits stinking from the heat that rises from the stove top. It’s always about you, isn’t it? 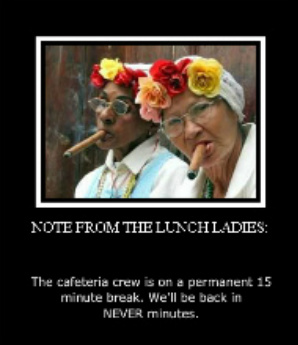 I don’t really know your kitchen routine, nor do I care as long as I’m fed sufficiently and bountifully, but for the record your refusal to heed my call for hotcakes is a little selfish if you ask me. If you knew then that you weren’t going to consider my request for a new fluffy delicious menu item, you could have simply told me instead of blatantly lying to my face. I wouldn’t have liked it. I probably would have badmouthed you to every living person on the planet, but I would have appreciated your honesty. Just so you know no one likes a liar – especially my stomach!

Instead of going off on a tangent and threatening to burn your kitchen crocs and hair nets, here’s what I’m going to do. I’m going to give you approximately seven days to run out and buy a box of Bisquick pancake mix and make some heavenly magic happen or else all hell will break loose. Those little men that constantly clog-dance inside my stomach and causes my tummy to rumble hungrily will be released to wreak havoc on your Toyota Corolla. If you don’t believe me, let me come to work next week with a bottle of syrup and not have anything to pour it on.

Again, I’m not threatening you. I’m making a promise.

Quote of the Week:  “When people you greatly admire appear to be thinking deep thoughts, they are probably thinking about lunch.”

One thought on “A Letter to the Lunch Lady”