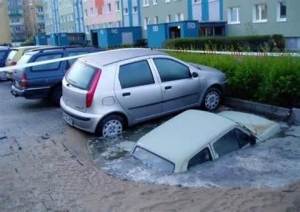 Over the last few days I’ve heard a few people complain about the bad days they’ve been having, myself included.

For example, I had a hankering for fried chicken for a full run of an eight out work day, an hour and a half of commute time, and the sixty minutes it takes for me to settle down and unwind after a long day of solving everyone else’s problems. Just as soon as the smoke settled from the soles of my feet from running around the office all day, it was finally time to fry up some delicious deep fried wings, when to my surprise I realized I had no cooking oil. The first word that came to my mind began with the letter “F” and ended with a “K.” Anyone that knows me knows that a disruption in my plan to devour some golden fried chicken wings is equivalent to the world coming to an end.

In the long run, though having a day incomplete with chicken wings is, can, or should be considered a natural disaster, it doesn’t constitute a bad day (unless of course you’re me. Shit ain’t right without my wings).

However for the record, as long as you’ve:

not lost all of your rent receipts and are now facing a $558 charge from your leasing office for non-receipt of funds on something you know you’ve paid; or

not received a phone call from a detective threatening to bring you up on charges of fraud for a payday loan you failed to remit in the amount of  [either] an $800 settlement fee or $4000 and some change, to include legal fees, late fees, miscellaneous penalty fees and kick your ass fees; or

not been told by your weed man that his car has been broken in to and his stash stolen on the day that your significant other broke up with you, auctioned off all of your personal belongings to their secret bed buddies, and your deodorant failed while riding the bus with a bunch of rude and brutally honest high school teenagers; or

not thrown up uncontrollably as a result of drinking too many vodka shots at the very moment of oral sex or penetration; or

not experienced a taste bud deficiency – specifically when all of your potato chips taste like canned spinach; or

not noticed that every pair of trousers you own has a hole in the crotch; or

not been demoted from a volunteer trash man to volunteer human pooper scooper in an urban city dog park, AKA the hood; and finally

not run out of cooking oil when you so desperately wanted to fry some damn chicken wings;

Then you have no reason to complain about anything. You’ve had a good day!

Quote of the Week:  “I think we consider too much the good luck of the early and not enough the bad luck of the worm.”

2 thoughts on “What Constitutes a Bad Day…?”