Me and my coworker do not get along and for the life of me I can’t figure out why. When I interviewed, he ran up to say that I would like it there if I was hired. Now I get the cold shoulder and I’ve been nothing but nice. 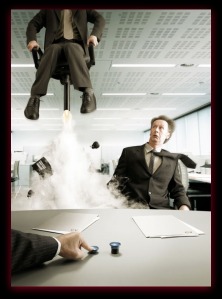 Unfortunately work is full of folks who wear plastic smiles. I call them members of the Mr. Potato Head entourage. Calling them names don’t do much [for me], but it does give me something to laugh at when I see them in the hallway.

I could speculate and give you a ton of reasons why you and your coworker aren’t getting along. Maybe you smell better than he does so he’s giving you a hard time because giving you a hard time is easier than spending a sufficient amount of time in the shower before going to work. Maybe you work smarter than your coworker so he’s giving you a hard time because you’re raising the bar on the productivity of work in the office, and for that he wants to smash your writing fingers with a glass coffee mug. Maybe he isn’t getting any nookie at home and comes to work horny and mad at the world but only takes it out on you because you smell better and work smarter than he does. Who knows? The possibilities are endless.

What I do know is that your work performance should not be contingent upon your relationship with your coworker. However I’m not sure of the line of work you’re in so I can’t be too sure about how closely you two work together. If you work as closely as I would assume, the next time he’s near you punch him. If he doesn’t get his act together after that, try one of my next suggestions.

You can go to your supervisor and complain (this never works. Supervisors are usually too lazy to care about your relationships with your colleagues. They want you to get the work done no matter what it takes and expect you to leave them out of anything as much as possible, until of course it’s time to give them kudos for all your hard work).

You can threaten your coworker during lunch behind the company vending machine (this is just as much fun as it sounds).

You can communicate with your coworker only via email and BCC your supervisor on the strand so that he/she may see what kind of a strained relationship you and your coworker share (at least this way you can talk to your coworker without actually saying a word – POOF! Mind blown).

You can flip your desk over dramatically, quit, moon the entire office and walk out of the building unemployed (this would probably be my last realistic recommendation but my first recommendation for a dream staged left exit).

Whatever you do though, you have to remember that shit happens in ANY office during the regular hours of 8am-6pm.

If your coworker hasn’t changed after any or all of that, ignore his ass and give him a taste of his own medicine. When he comes to you for some kind of help, and he will, it will be your sole responsibility to play as dumb as a door knob.

If all else fails, build a covert ejection seat for his swivel chair. When he pisses you off, press EJECT and watch the dome of his head go crashing through the ceiling. If the concussion doesn’t kill him, try again tomorrow. No one can survive an ejection blast twice in one lifetime. #IfAtFirstYouDontSucceed…

to see what other people are asking or visit