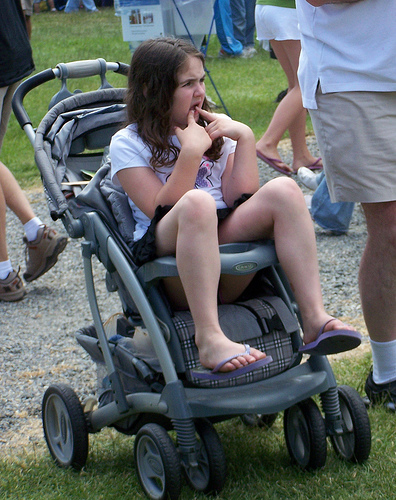 I know I’m going to step on some toes here, but what the hell is the deal with mothers who carry big ass babies in strollers? Babies that are big enough to push their moms around, carry groceries, and mow the lawn?  Are there so many dependency issues that are un-discussed that this blatant baby stroller abuse is exceptional?

I don’t place blame on the super smart children who are clever enough to pull the wool over their parents’ eyes and have them push them around town like programmed robots.  I commend those brilliant little rugrats actually, and wish they’d send me a ‘How-To’ manual.

Who I do place blame on are the oblivious parents who are stupid enough to push around these midgets.

If you parents don’t wake your asses up and make these children walk!  This is the reason why we have loud, rude and obnoxious children running amok inside our local grocery stores, malls and subway stations.  Parents are cradling their children and giving up their parental control even before the children’s evil little minds develop enough to understand the power of parental manipulation.

As a spectator and avid fan of all babies, from the ages of infancy to late toddlerhood, it’s time for someone to take a stand and tell you overly dependent mothers to stop hogging the treadmill and let those babies exercise their legs a little.  Children like to walk.  Something about activities keeping their bones strong…[I don’t know].  Besides, you look stupid pushing around those big little people and I have to admit that people like me are forced to talk about you and exploit your idiocy.

It’s evident that there are a host of “holding ons and letting goes” that parents have to do as part of raising their children: from relating to friends, to going to school, to buying a candy bar, to sexuality, to safe health practices, to driving, to voting, to getting married and having children of their own.  What the parent(s) need to understand is that the phase of letting go becomes easier once they tip the stroller forward and force the kid, who’s probably all of 12 now, to get up and stand on his/her own two feet.  This will teach the child to be independent, confident, strong, and totally not the geek in over-sized glasses who gets picked on and beat up every Friday at 3PM.

The history of strollers extends back centuries in time even before the first automobile made its debut.  There was a time when a baby carriage (as it was first known) was considered a luxury only afforded by those of elite society, who actually carried babies inside the carriages. Today any household with an infant (or a puppy) is more than likely equipped with a baby stroller [cue Tori Spelling].  Over the past few, oh gazillions of years or so, a plethora of strollers have been designed for all different purposes, terrains and activities.

But there is not a stroller built for those children whose legs drag the ground as their parents push them, while the kid sends text messages on their Cricket cell phones.

Parents, it’s time to let go a little.  Take a deep breath and cut the umbilical cord already.  If need be, I’ll buy you a damn pair of scissors myself.

Too much holding on and too little letting go and those poor babies will believe that you don’t have confidence in them and they’ll eventually fail to learn from their own trials and errors what they need to know to navigate into the adult world.  They are going to grow up to be needy helpless adults who live in your house and eat all of your food until you’re old and dried up and unable to fold their laundry and spoon feed them soggy Captain Crunch cereal.

Typically when I see this moral code of conduct violated, I don’t know whether to drag the kid by the collar out of the stroller or smack the parent in the center of the forehead for putting that big mofo in a stroller in the first place, but I’m just one person.  If I’m the only one who’s willing to take a stand, then I’m simply begging for a few years in jail or a serious up ass kicking.

What I can do however, is offer a little advice:

There is an excellent parenting book that I stumbled across that deals with this dynamic. It’s available in most book stores.  The name of it is Getting Those Big Ass Kids Out of Those Small Ass Strollers For Dummies.

Make the effort.  Read the book.  Have some courage and let your kid walk.  Truth be told they’re probably holding their head in shame as you strap them inside that baby stroller while they’re studying for their pre-calculus exam.  Cut the cord.  Let them evolve into a capable adult.  Stop making excuses and start making some changes!

Quote of the week:    “Parents who are afraid to put their foot down usually have children who step on their toes.”