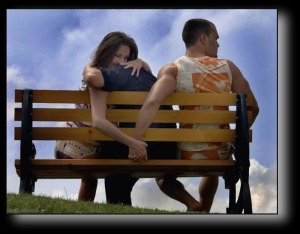 The summer is sizzling and unfortunately, so are the tempers!  With each increasing degree of summer’s blaze, more and more clothes are peeling off, revealing to men and women alike, the glistening skin of toned upper torsos and perky ta-tas.  Tis the season to be jolly, just as long as you are single.

Smart mouths, bickering gripes, and wandering eyes are what most people have to look forward to this summer.  Short skirts and tank-tops are the season’s way of reminding bunned-up couples that it’s time to ditch their mates and flirt with every passer by who’ll look at the sweat dripping in all the right places for all the scandalously wrong reasons.

Get ready folks.  A rumblin’ is a comin’.

It’s no secret that most relationships die off around

the holidays – specifically birthdays, Christmas and Valentine’s Day, so the cheap one in the relationship doesn’t have to buy the needy one a gift.  But when the summer months come around, it’s a horse of a different color!  Men workout more to lift those perfect pecks while women eat less to give their waistline the ideal measure to accentuate those perfect boobs and that chewable apple bottom.  The name of the game is to look your best and flaunt all your assets because now is the time more people are going to be interested in what you have to

During the hot season of summer, women are less likely to roll their eyes at a man for greeting her with a false sense of intention. Seemingly, men are more on top of their “game” because the woman is often times, much easier than she’d be if the chill in the air was as rigid as the chip on her shoulder.   It’s easy pickings.  One trollop after another.  One trip to the clinic waiting to happen.  No repercussions.  No explanations.  No ifs, ands or buts.

But don’t be fooled by the nearly naked.  These skanks-in-waiting are merely on loan.  The break-ups people encounter for the summer for reckless sexual arousal are usually temporary.  You can’t place much expectation in a dry hump on a hot July night.  The hump is just a hump and it ordinarily leads to an open gate of more activity with mor

e players to the field.  The summer is typically not the right time to try to get into a relationship.  That’s what the rest of the year is for – again, except for the above mentioned holidays – birthdays, Christmas and Valentine’s Day (for all you cheap readers out there).

The next time your mate picks a fight with you, don’t take it personally.  It’s just a change of a season.  Well…maybe you can take it a little personally considering they’re only doing it for a free-for-all for those half dressed scoundrels who look better out of clothes than you do.  Let them go.  Like a boomerang, they’ll come back.  In the meantime, don’t feel guilty for wearing less material and showing off more of your own body parts.  Hey – if you got it, flaunt it.  You’ll appreciate the attention in the long run.  You’ll also have quite a

little memory in the back of your mind when winter has returned and you and your lover aren’t speaking over some dumb argument that made no sense in the first place.  Just because you’re at the mall doesn’t mean you can’t shop…especially if there’s a return policy in effect.

This summer, go out.  Take a little off and see where, what and to whom it leads.  Stella got her groove back in the summer months.  So can you.

Quote of the week:   “Eagles may soar in the clouds, but weasels never get sucked into jet engines.”