When the church bells have finished ringing and the congregation has silenced their whispered gossip, uneasily awaiting the liturgical dance ministry to pop, lock and drop it down the center aisle, wearing the same freak ‘em dresses and f—k me pumps they wore to the club just hours before brushing their teeth and spraying on a quart of the perfume they bought from the 24 hour convenient store, that’s when you know church is in session.

Church has always been the one place where gang-bangers, hoes, and addicts are the most looked down upon and talked about, yet the one place where most faith-filled persons invite these sinners to come, until one sinner dared to stand before the congregation to challenge the sins of the saved versus the lost souls who come to the alter to seek deliverance.

The man who fell prey to the grips of the world stood before a sea of big hats, dark suits and baby mamas too young to tell what the phrase, “wet behind the ears” really means, and dared them all to stand before a mirror to judge themselves before huddling in a prayer circle to condemn the sins of he who needed to be saved. 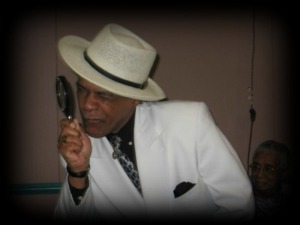 “Mother Granola Crack,” he called from the church front, pointing his finger in acknowledgement of the seasoned church goer, “…you should be ashamed of yourself to turn your nose up at the children who are singing God’s praises with 16 bars of rap verses when it is all but public knowledge that your granddaughter has bedded just about half of the boys in the choir, as well as the drummer who plays the beat of the percussion.  Deacon Whatshisface should be the first one standing before the alter begging for merciful forgiveness for shouting “Hallelujah!” this morning, when last night he was standing outside of the liquor store shouting obscenities in malice and jest. Brother Pastor Preacher Man should be condemned to a pit of his own deceit as he preaches a word against homosexuality, knowing full well his partner is the one who picked out the First Lady’s handbag and matching shoes.”

The church members clutched their pearls and gasped their breaths in awe as the fallen soul pointed from one member to another.  He pointed to the usher standing at the door of the vestibule and shook his head in disgrace.

“You, my friend, are not guarding the door to God’s house.  You are waiting for your next customer to approach you for their next fix.  You are watching for the men in blue who’ve been peeping you under surveillance for the last 6 weeks.  You are blocking the entry way from your baby’s mama, to whom you owe backed child support.  You aren’t keeping the devil out. You are half-heartedly hiding amongst people wearing Satan’s garments in an effort to disguise your own devilish ways.”

Quickly he pulled the microphone from its stand and recited the following words as he peered upon the church’s trustees:

“I hope you don’t bother to release the hounds on those members who have not yet paid their pledges, dues or tithes, because it would be awfully hypocritical of you when the church’s electric bill is past due and the mortgage company has sent out a third warning notice of eviction.  However I will commend you on the new cushions on these hard ass pews, and the flat screen TV inside the Brother Pastor Preacher Man’s study.  You probably think no one knows what goes on underneath the table, but you can’t and shouldn’t forget how much church folk talk.”

With genuine eyes, he turned to gaze upon Brother Pastor Preacher Man to offer a head nod as acknowledgement of apology for pulling his card.

“You see,” he continued, “I don’t stand before you to point out your sins for the mere satisfaction of seeing you sweat inside your expensive Brooks Brothers suits and Lane Bryant skirts, as enjoying as it may be.  I stand before you to let you know that all have sinned and fallen short of His word.  You nicely dressed heathens have some praying to do for yourselves before you pray falsities upon me.  I may not rise to your once-a-week Sabbath day standards, but I am high on my Father’s list and I know that my work is unfinished because God ain’t through with me yet.  I stand here to be used as a vessel as no truer words have ever been spoken:  Wherefore whosoever shall eat this bread, and drink this cup of the Lord, unworthily, shall be guilty of the body and blood of the Lord.  But let a man examine himself and so let him eat of that bread and drink of that cup.  For he that eateth and drinketh unworthily, eateth and drinketh damnation to himself, not discerning the Lord’s body.  For this cause many are weak and sickly among you, and many sleep.  For if we would judge ourselves, we should not be judged.  1 Corinthians 11:27-31.”

At the very moment when the church would usually gather their voices in harmony to recite the ever popular, “Amen!” not a single soul uttered a word, except for the lost souls who came into the sanctuary genuinely seeking salvation and the one man who brought his own communion wine who sadly raised his bottle in the air and said, “I’ll drink to that!”

Quote of the week:   “How will you spend eternity — smoking or non-smoking?”

For more funny play house praise, be sure to pick up your copy of Hottywood Helps’ new book, “Tracks of an Underground Advice Columnist” and get your dance on with the members of The Holy Hood Church of Mount Mattress Bedside Tabernacle!

2 thoughts on “Let the People of the Church Say, “Amen!””