The relationship I’m in with my girl isn’t going quite the way I imagined it would after dating for a number of months. I still like her. I might even love her, but because we’ve faced so many exhausting challenges, I think I’d be okay whether we stayed together or broke up. This is a Catch 22. My question however isn’t about my relationship. I’m already okay with however that turns out. My question is what is a Catch 22? 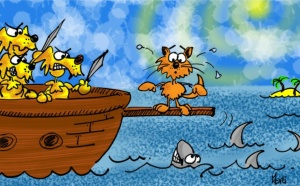 First of all, Boy Don’t Read, I need you to read something. It’s good for your mind. I sure as hell hope you read this because I’m a lazy mofo and today I’m in lazy mode, but my readers come before anything, even my laziness…well, except bacon…and God…and ass (not necessarily in that order). Okay, now moving on to your question.

Wait, before we begin, let me wish you luck on things with your girl. I’m a big sarcastic sap and I love love. With that said I’m hoping you two can get your shit together and remember why it is you started dating in the first place. Also, don’t lie to yourself. If you’re not happy, then move on. If you’re unsure then listen to my first suggestion and try to remember why you started dating in the first place.

Okay, NOW on to your question.

There is a whole hard-to-understand definition of Catch 22 plastered all over the internet. Instead of giving you a bunch of words and rules that you’ll need a translator to comprehend, lemme break it down to you by saying “You’re damned if you do and damned if you don’t,” or “you’re screwed either way.”  That’s the simplest way of defining a Catch 22.

The term Catch 22 was first introduced in the 1961 novel, “Catch 22” (written by Joseph Heller) which describes absurd bureaucratic constraints on soldiers in World War II. The term, in relation to the book, invokes “Catch 22” to explain why any pilot requesting mental evaluation for insanity—hoping to be found not sane enough to fly and thereby escape dangerous missions—demonstrates his own sanity in making the request and thus cannot be declared insane. This phrase also means a dilemma or difficult circumstance from which there is no escape because of mutually conflicting or dependent conditions.

It’s been suggested that the idea of a “Catch-22” has gained popular currency because so many people in modern society are exposed to frustrating bureaucratic logic.

“Everyone, then, who deals with organizations, understands the bureaucratic logic of Catch-22. In high school or college, for example, students can participate in student government, a form of self-government and democracy that allows them to decide whatever they want, just so long as the principal or dean of students approves. This bogus democracy that can be overruled by arbitrary fiat is perhaps a citizen’s first encounter with organizations that may profess ‘open’ and libertarian values, but in fact are closed and hierarchical systems. Catch-22 is an organizational assumption, an unwritten law of informal power that accepts the organization from responsibility and accountability, and puts the individual in the absurd position of being accepted for the convenience or unknown purposes of the organization.” – James E. Combs and Dan D. Nimmo

“Heads I win. Tails you lose.”

Click HERE to get your copy of HottywoodHelps.com’s debut novel,

“Tracks of an Underground Advice Columnist”